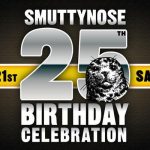 Smuttynose Brewing Co. is turning 25 this summer – which in brewery years is more like 100. Simply put, it’s a big deal and we’re very proud of it. To mark the occasion, we’re hosting a beer festival unlike any other you’ve attended before.

We’re not just throwing a party for us, we’re inviting all our best brewery buddies along the East Coast to join in the fun. That means you’ll have the opportunity to sample beers from more than 25 incredible breweries all in one picturesque place, complete with food, music, and games to keep you entertained all day and into the night.

What’s more, we’re teaming up with all participating breweries for one incredible celebration brew to commemorate the occasion, which we’ll be brewing the day of the festival and releasing to the public in October.

A portion of all proceeds will be going to Warrior Expeditions, an incredible New England-based organization helping military veterans heal through the therapeutic power of hiking, biking and paddling in the great outdoors.

Ready to party? The festival runs from 3-6pm but beers will be available for sale afterward until 9 pm! Get your ticket now – you’re not going to want to miss this.