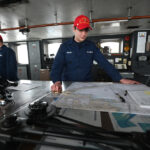 When Eli Madison, a native of Northwood, New Hampshire, completed basic training in 2019, his orders to serve aboard the nation’s sole heavy icebreaker were special not only because of the unit’s exclusive polar-based missions, but because Seaman Madison’s legacy on the Coast Guard Cutter Polar Star preceded him by more than thirty years.

Currently deployed to the Arctic on a months-long patrol in support of the Coast Guard’s Arctic Strategy, the Polar Star is conducting service missions and projecting U.S. presence and sovereignty in the Arctic’s Bering and Chukchi Seas.

As a seaman working aboard the Polar Star during its historic winter patrol, where on December 25th the crew sailed farther north in winter than any U.S. surface ship in history, Madison is succeeding his father who also, three decades earlier, worked aboard the same ship sailing the planet’s most remote, frigid waters.

Eli’s father, Kevin Dow Madison, began his career in 1978 as a seaman aboard the Coast Guard Cutter Active, but soon reported to advanced training to become a boatswain’s mate. From training, Kevin reported to the (then) newly-commissioned Polar Star as a third class petty officer.

Polar Star missions took Kevin to both Arctic and Antarctic waters and, after Kevin advanced to second-class petty officer in 1981, he transferred from the heavy icebreaker to embark new missions and continue a prosperous Coast Guard career — eventually earning the rank of senior chief petty officer and becoming one of the last crewmembers to serve as keeper of the historically-rich Isles of Shoal Lighthouse on White Island, New Hampshire.

Kevin left active duty in 1988 to pursue a career as a firefighter – but continued to serve in the Portsmouth, New Hampshire, Coast Guard Reserve Unit until he retired from the service in February of 2003. During his time as a Reservist, Kevin was called to back to active duty for a short time following the events of 9/11.

From his recollections spanning twenty five years of dedicated Coast Guard service, Kevin’s most shared sea stories are from his time underway in the world’s most inhospitable regions – and of his Polar Star Shipmates, who he endearingly still calls his “Ice Brothers.”

“Growing up my father never pressured me to enlist, but as soon as he learned of my interest, he was supportive and excited to offer advice,” said Eli. “In the summer of 2019, with his encouragement, I reported to basic training in Cape May, New Jersey.”

Coast Guard Cutter Polar Star (WAGB 10) crewmember Seaman Eli Madison, a native of Northwood, New Hampshire, stands watch on the bridge while underway in the Bering Sea, Monday, Feb. 1, 2021. The Polar Star is underway in the Arctic to protect the nation’s maritime sovereignty and security throughout the region.