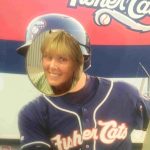 By Carole Soule and Rick Epstein

Not long ago, I went to Manchester to see the Harrisburg (Pa.) Senators play baseball against the New Hampshire Fisher Cats. The home team is a double-A affiliate of the Toronto Blue Jays, so you can see future big leaguers playing for the Fisher Cats on their way up. Because the minor leagues cultivate talent for the majors, they are called “farm teams.”

But farm teams don’t have much in common with my farm, except for one thing: the inter-inning festivities that entertain visitors.

The intervals between innings are filled with activity. Children, dressed as teeth, race around the foul line. Two people in inflated Sumo-wrestler outfits battle it out in front of the Senators’ dugout. Minor-league fun can include dizzy bat races, shooting T-shirts into the stands, human cannon balls, and post-game fireworks. The roving camera flashes live video onto the Jumbotron, and we see fans smiling, waving, dancing or kissing. Mascot antics are a highlight. The Fisher Cats’ spirit animal is named Fungo. The heavy furry suit is heroically filled by someone willing to cavort and romp with the fans night after night in summer heat. Posing for selfies? You bet! Try not to think about the poor soul sweating inside that costume. He made his choice and wants us to enjoy his nonsense. And we do.

Yes, there is baseball, but it is brimming with fun.

If there’s one thing we all like on our farm even more than shoveling manure; it’s fun. The goats love to chase each other around the barnyard. Eleanor, the donkey, likes to kick up her heels and roll in the gravel to scratch her back. The baby calves’ favorite sport is chasing any chickens that wander into their pasture. It’s quite a show.

Our lamb is there just for petting, and her comical bleating adds to the ambiance. We have even trained some of our cattle to give rides. I’ll put a saddle on 1,400 lb, Curious Bleu, a Scottish Highlander steer with horns “out to here.” As long as he gets carrots, he’s happy to trudge around the barnyard with a thrilled child on his back. Yes, we do sell delicious grass-fed beef here. But we realize Miles Smith Farm, at the end of its own road, is not really on the way to anywhere. So we add some fun to make the farm a destination; just the way the Fisher Cats enhance the ballpark experience.

I’ll tell you another reason I’m a Fisher Cat fan – because I’m obsessed with buying local. (Have I ever mentioned that?) Nothing against our beloved Sox, but an evening of pro-baseball fun can be had that is cheaper, closer, sillier and more personal right in Manchester. (If you go, tell Fungo that Curious Bleu wants to race him around the infield.)

Carole Soule is co-owner of Miles Smith Farm (www.milessmithfarm.com), where she raises and sells pastured pork, lamb, eggs and grass-fed beef. She can be reached at cas@milessmithfarm.com. Rick Epstein edited and contributed his baseball expertise to this story.