↓
Home→Barnstead→Message in a Bottle Found After 30 Years 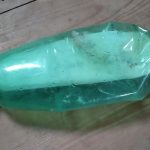 In 1989 a person from New Hampshire wrote a note, sealed it in a bottle, and sent it out to sea. Probably never expecting to see it ever again, but just the opposite has happened. Someone did find it on September 22, 2020. The person who found it is from Wales, UK. She found the bottle washed up on the beach some 3,000 miles away from New Hampshire. There was a note inside from a resident of Tamworth, New Hampshire USA. The person included their name, address, and phone number. But the person who found it took it to social media and joined a group called “New Hampshire“. She posted it on the group’s page and immediately the members of the group began brainstorming who the person was. Later that same day one of the members notified someone they thought might know who had the same last name. To her surprise it was that person’s step son. She texted him and he confirmed that yes he did put a note in a bottle and put it in the ocean in the late 1980’s.