↓
Home→Pittsfield→Ever Have a Calf in Your Kitchen? 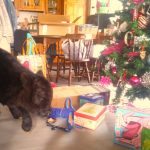 The calf was due in December, sometime around Christmas Day. So we sequestered Puff in the holding pen and would check on her during the night. Puff, a silver Scottish Highlander, is an old cow, age 14, and because her last calf died, we were prepared to give her some help if she needed it.

It’s never a good idea for cows to give birth in the winter. A calf used to the 101.5-degree warmth of the womb can die of hypothermia when born in freezing temperatures. They need to be warm, dry, and nursing right away.

Most of our cows give birth in April or May, but Puff was an exception. I had sold her years ago to a farm in Dover, but last June, I repurchased her, already pregnant. When my vet checked Puff, she predicted a December birth.

Christmas came and went with no calf — until the morning of Jan. 5. At 7 a.m. I found Puff hovering over a black ball of wet fur in a corner of the paddock. Farm helpers Melissa, Olivia, and I managed to get mom and baby into the holding pen and then finished our morning chores. When we checked, the calf’s temperature was a low 95 (it should have been 101.5), so we brought her into the farmhouse kitchen.

As she dried out and warmed up, the kitchen filled with admirers. Neighbor Marianne stopped in, then our weekend Airbnb guests crowded in to ogle the baby. They were delighted to learn our policy: Anyone staying in our inn when a calf is born gets to name it. Our guests picked “Lucy.”

We fed Lucy some yogurt that Olivia had made the day before and then some raw milk from Huckins Farm in New Hampton. After a little food and an hour in front of a space heater, she tried to get up. These would be her first steps, so to give better traction on the kitchen floor, we put down a yoga mat. When she tried to stand, Lucy stretched forward, in a perfect yoga form, with two rear legs splayed wide. Eventually, she shifted her weight and got all four legs under her.

A kitchen is not a good training pen for a calf. As she walked on wobbly legs, Lucy crashed into the refrigerator, knocked over the trash can, and tipped over the fire extinguisher. But with some human guidance, she staggered around the house, pausing for a quick sniff of the Christmas tree.

She was warm, fed, and walking, so we decided it was time to move her back in with her mother. But first, she had to prove that her personal plumbing was fully functional. She did that by relieving herself on the kitchen floor.

Now Lucy is in the holding pen with a kerosene heater warming her and Puff. In case you’re in the neighborhood, drop by to admire our January bundle of joy at the farm. As much as we wanted a Christmas calf, we’ll settle for a New Year baby. We love Lucy and you will too.

Carole Soule is co-owner of Miles Smith Farm (www.milessmithfarm.com) where she raises and sells beef, pork, lamb, eggs and other local products. She can be reached at cas@milessmithfarm.com.