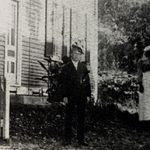 Warner, NH: The Black Heritage Trail of New Hampshire (BHTNH) will hold its first ever guided tour in the town of Warner on Sunday, October 6, 2019 at 10 am.  The tour, entitled, A Small New Hampshire Town Remembers Its Black History, will be led by Warner residents and historians Lynn Clark & Rebecca Courser.

Warner is a small rural community nestled twenty miles northwest of Concord, N.H.  The main village lies between the peak of Mt. Kearsarge and the rolling Mink Hills.  It was mainly an agricultural community until settlers took advantage of the falls along the Warner River to establish a variety of industries.  By 1810, several black families and individuals had settled in Warner and this community would continue to expand for the next hundred years.  Five African American men are listed on the Soldier’s Monument as serving in the American Revolution, the War of 1812, and the Civil War.

On this tour you will discover the stories of Anthony Clark, musician and dance master; James Haskell veteran of the 54th Massachusetts Colored Regiment; and William Haskell an accomplished basket maker.  Several children attended one-room schools throughout Warner.  After the Civil War, families employed servants from Virginia and North Carolina to cook, clean and work on their farms.

Beginning in 2017, the BHTNH has expanded its award-winning tours, ranked best Walking Tours in New Hampshire by Yankee Magazine, throughout the state.  Tours started on the original Portsmouth Black Heritage Trail five years ago.  Weekly tours are held in Portsmouth from May through October, and special tours are now held in Milford and Hancock as well as in Warner.  The BHTNH plans to continue to find tour locations throughout the state.  The next guided bus tour outside of Portsmouth will be held on October 25, 2019 in Milford, NH as part of the Black New England Conference at SNHU in Manchester.

The tour is led by two women with a strong background in the history of Warner.  Lynn Clark is the current Director of the Warner Historical Society and Rebecca Courser is the retired director.  When not researching Warner history they are researching the lives of black families throughout the area.

The tour bus meets in Warner at the Simonds Elementary School on Church street.  Guests are asked to plan to arrive at 9:45a.m.   The cost of the tour is $25, and registration is available online through the BHTNH website.

For more information on this and other tours, please visit http://blackheritagetrailnh.org or email [email protected]

About the Black Heritage Trail of NH

Guided tours and public programs, along with educational materials and teacher workshops, will continue to be developed by the Black Heritage Trail to promote awareness of African American culture and to honor all the people of African descent whose names may not have been included in previous town histories.  The Black Heritage Trail of New Hampshire provides a variety of learning experiences for adults and children. Offerings include school programs, guided tours, traveling programs, lectures, and workshops.

The Black Heritage Trail of New Hampshire is an independent, nonprofit organization. The organization is a registered 501c 3 nonprofit; Taxpayer Identification Number 81-3921917.