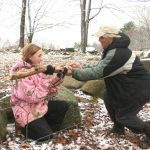 The stone walls that line the edges of our property were put here by Miles Smith in the 1850s and ’60s. Constructed with rocks extracted from the fields, Miles moved every boulder and rock with a team of oxen. He would lever each rock onto a sled called a “stone boat” and then direct his team to where he wanted the wall – most likely the property line. Then Miles would arrange the stones to make a “dry stack” wall, counting on gravity, not mortar, to hold them in place.

Thus fields were cleared of thousands of rocks for agricultural use, and the walls would keep livestock in their pastures.

In Robert Frost’s poem “Mending Wall,” he wrote, “Something there is that doesn’t love a wall.” There are numerous “somethings” that don’t love a wall and are continually trying to breach it. They include frost heaves, wildlife, and even hunters. The poem is called “Mending Wall” because farmers were always repairing them.

Instead of stone walls today, we depend upon more-fragile electric fencing. If Frost were to write that poem now, he might title it, “Oh, I Give Up!” These fences have a low-voltage pulse. When touched, the zap is no stronger than a bee sting, but don’t tell the cows that! If a cow gets zapped on her nose, she’ll think she is going to die, and most won’t risk another encounter. It’s all about perception.

To carry a charge, the wire needs to be insulated from touching the ground. This means if a tree falls on the fence or weeds grow up around it, the charge will be weak or non-existent. Some of my cows touch the fence with a horn, not a nose, and if they don’t feel a zap, will walk through the wire.

The same forces that dismantled Robert Frost’s stone wall are hard at work, trying to take down my fences. It’s a never-ending battle with wind that wants to drop a tree branch on my fence, or a deer taking a shortcut through it.

Sometimes a spooked herd will run through a fence – like the time a neighbor’s stray July 4th skyrocket exploded in a multi-colored burst over one of our fields and started a stampede. The herd charged through a wire gate and two fence wires before they got bored and stopped.

When building the fence, sometimes rather than install a post, we’ll attach the wire to an insulator on a tree. Even with tree-saver mountings that are supposed to expand with the tree, sometimes the bark grows around the insulator, devouring the wire and shorting out the zap.

And yet, as husband Bruce and I regularly repair our fences, we look over our mostly rock-free free fields and feel like we are working with Miles to keep this little patch of earth a farm. Fence fixing is a forever-battle because, just as Robert Frost said, “Something there is that doesn’t like a wall.”

Carole Soule is co-owner of Miles Smith Farm (www.milessmithfarm.com) in Loudon, N.H., where she raises and sells beef, pork, lamb, eggs and other local products. She can be reached at cas@milessmithfarm.com.