↓
Home→Pittsfield→Why My Cows Are Looking Ahead To Nov. 1 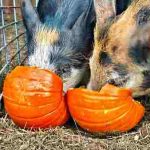 We’ve had a frost or two already, which means Halloween is near. My cattle and pigs love Halloween, and it’s not because they dress up like goblins and beg for candy. It’s the day after Halloween that they love. That’s because every pumpkin merchant, whether at a farm stand or a supermarket, knows that the pumpkin-buying public has disappeared by Nov. 1. And all those misshapen or blemished or extra pumpkins, which have missed their chance to delight children, can still delight my cattle and pigs. They like discarded jack-o-lanterns, too.

So after Halloween, we search out pumpkins on behalf of our beasts. Bruised and broken pumpkins can be fed to the cattle as is. The cattle dig their lower teeth (they don’t have upper front teeth) into soft and broken pumpkins, but the whole ones are another matter. To help them out, we smash them.

Throw a pumpkin to the ground, and most likely, it will bounce and roll away – still whole. But slam it onto a concrete floor, and it will break open, exposing the guts. Cattle will eat the shell, but their favorite part is the seeds and the gooey, stringy parts inside.

Why do I find smashing pumpkins so satisfying? Maybe it’s because when I was a child, I wasn’t allowed to. Each October, people naive enough to leave their jack-o-lanterns out overnight would find that young delinquents had smashed them in the street. (They already had the technique figured out.) I didn’t want to be a bad kid, but I sensed that I was missing out on some fun.

If you don’t know what to do with your pumpkins this year, bring them by the farm. You can even do the cattle a favor and smash them to bits after you get here. You get the fun of delinquency plus the satisfaction of doing a kind deed for your fellow creatures. It’s a rare opportunity!

Carole Soule is co-owner of Miles Smith Farm, in Loudon, N.H., where she raises and sells beef, pork, lamb, eggs and other local products. She can be reached at cas@milessmithfarm.com.