↓
Home→Pittsfield→Sorin the Steer’s Taste of Freedom 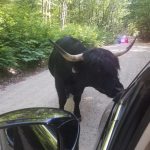 The Canterbury Police phoned three times. The first call confirmed that Sorin, one of Miles Smith Farm’s working steers, was hanging out on Hackleboro Road. The other calls were to find out when we were coming to collect him. The police chief was cruising along behind Sorin as he wandered along the road, eating brush and investigating the neighborhood, and the chief wanted to get back to more traditional police work.

Sorin was pastured at Ty Miller’s farm on Baptist Hill Road with five other steers, including Sorin’s friends, Topper and Stash, my top team of oxen. Two days before his escape, I brought Topper and Stash back to the farm. Both are out of shape and need daily training sessions before they can compete at the Hopkinton Fair. Sorin left behind in the pasture, stood next to the gate watching them go.

After a day of waiting, Sorin decided it was time to find his friends. Escape was easy. A tree had fallen across the fence at the back of the field. The other cattle must have seen the opening but decided the pasture, with its lush grass, was more pleasant than the abutting forest. Not so Sorin. He was on a mission – to find his missing friends

He crossed over the fence and made his way through the woods to the front of the pasture and to the road. He spent some time munching on bushes in a neighbor’s yard because there’s always time for a quick snack no matter how urgent the quest. The neighbor called the police about the wandering “bull.”

Sorin, a shaggy, black, 900-pound Scottish Highlander with 18-inch horns, can look intimidating. But he is tamer and better behaved than many dogs. Call his name, and he’ll come. He loves neck scratches and belly rubs, but I admit he looks scary.

While I was on the phone with the police, Ty found the downed tree, removed it, and restored the fence. I hooked the stock trailer to the pickup and went to collect my wandering steer.

I guess Sorin decided his search was hopeless and, with his police-car escort backing along the road in front, he meandered back to the pasture. Ty found him waiting at the gate and opened it for him. Sorin dashed in, apparently reconciled to the absence of his colleagues. But he’s in for a pleasant surprise.

Soon Sorin and Finn, another ox-in-training, will be reunited with Topper and Stash back here at the farm to prepare for the Hopkinton Fair. If he had the vocabulary, I’d sure Sorin would have plenty to tell his buddies. But a bovine bromance is about quiet companionship, uncluttered by words.

Carole Soule is co-owner of Miles Smith Farm (www.milessmithfarm.com), where she raises and sells pastured pork, lamb, eggs and grassfed beef. She can be reached at [email protected]